Almost on its way

I took a while with this quilt there are decisions that I was not sure of and wanted to make sure that they were right. I am not sure if anyone saw this at the beginning when I first started blogging... but it is a quilt that I put together with blocks from a nine patch and a bullseye swap that a member had participated in and then passed away. It was very sad for me and many of the members cause we all started in a forum called Quilters Talk by Fon's and Porter then it shut down abruptly and we lost all of what we had accumulated there.. pictures, tips and tutorials and friendships.
We were fortunate that members had started bonding and emailing each other and were able to let each other know of another group we all were heading to that another member organized...well we had problems with the "tech person" and that closed!! then another member decided that was it!! she and her hubby made another site and it turned out another member had the same idea so we now have 2 sister forums that have their own members running it with trusting originators to help make them a home. I have the links on the side bar Quilters Last Resort and Coming Together to QuiltIn all this transition and just settling in our dear Merrybee passed suddenly and we had the opportunity to meet her lovely daughter...Shelley.
Shelley said she had all these blocks and not sure what to do with them so I offered to do something with them. I got the blocks and thought I could whip it up for Christmas... didn't happen I had it planned and partially together but had 12 blocks left that I had to get in the quilt my motive was to use all the signature blocks none were going on the back of the quilt!! Plus it was for her husband so what kinda boarder was I gonna do.. that is what took the longest. Finally had that figured out and then I had to find a LAQ cause I sure could not machine quilt it..I kept practicing but there was no way I would only make a mess...my Friend Sandy Lindal (the one that did my mini earlier) quilted it for me with whimsical fluttering bees and flowers how perfect!! in the nine patches she used this wonderful scroll pattern and a great leafy pattern along the skinny boarder.
I have the binding on and now am making the signature block.. guess what it is you are right!! it will be a bee. I was able to get the pattern from

So on the note of friends I would like to thank everyone for their time out of their sewing and voting on which Miniwill go to my swap partner...it will be the thimble.. the reasoning makes sense.
The bonus all those that had commented are put in a little box and I pulled out #6 Mary in Lake Pulaski... will get the black and white one.. I know I didn't say it was to be a draw.. but with all the hands up on everyone wanting it I thought it was a great idea.. Mary I will email you for your address.. thanks again everyone for your wonderful time!!
Posted by Deb at 5:10 PM 9 comments:

Good Morning!! I have finally finished with the Mini Auction I think it was a great success. All 90!! yes I said 90 quilts that were donated went except for 3 which will be donated to the Pegusas gift shop. I think that was great!! the broken star went for $110 dollars, the shy fly went for $60 dollars, and the Anvil one went for $80 ( a renowned quilt teacher in our area really wanted that one). I will have more facts after our executive meeting.

What I need help in is I signed up for the Quilters bloggers mini swap and the person I have does not have a blog!! so I know nothing about her. I made a prim one and a modern one.. I need you to vote on which one I should send!! Click on the pics for a closer view.. the black and orange I am putting some beading on..will get back in a couple of days to see what you decided... or should I just make another one?? 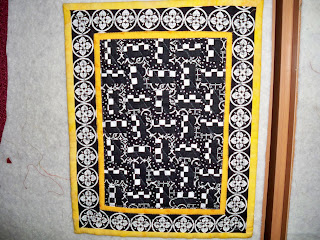 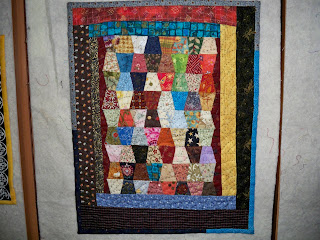 A Happy Mothers Day to all Blogger Friends, forum Friends and friends that I am able to meet with personally. This is always a special day and I am very lucky to spend it with my mother. Here we are together after a wonderful day in Niagara Falls Ontario taking in their spectaclar quilt show. There was a special table just for the 2 of us and the Ladies that organized the show took a picture of us eating their delicious cabbage rolls and apple dupplings..homemade!! yum 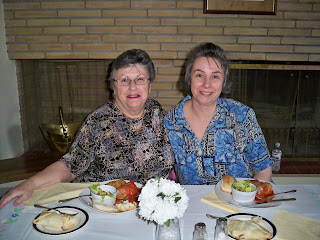 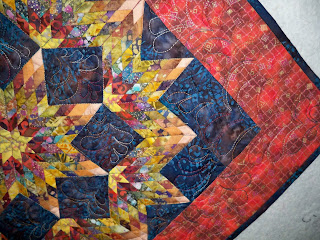 I have a Fantastic Friend as well Sandy Lindal a LAQ she took time out of her busy quilters life (3 teens!!) and quilted my broken star mini (24in square) Sandy done this on her table top Bernina!! Sandy done fantastic feathers for me in these 2 inch squares and then on the outskirts more delicious feathers (if only I could). I just sat in awe and watch her zoom this baby along. Sandy is so precious and I thank her for her time and her ear.. I have bent it a few times these 2 weeks. If you click on the pictures you will see more detail. 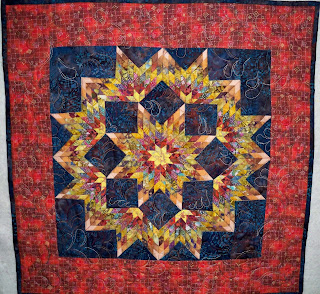 This mini will be donated to our Yorkshire Rose Mini Auction that will be on May 13th only 4 days away!! I have been busy with getting my mini's done and organizing the paper work that needs to be done for the auction. It is alot harder to give this up Sandy done such a fabulous work of art on it...but she would like us to make one for each other.. so that makes it easier!! LOL
If you have 2 hours out of your eveing please come and join us. Look to the side of my blog and you will see our guild information there with the flyer on all the information.
Have a spectacular day.. Mom and I are going to Peterborough today for their show.. will be posting more on the mother/daughter adventure for this weekend.
BTW.. I noticed it has almost been a month...I have been keeping up with your highly incentive projects but have not posted mine... after the middle of May I will be more regular.. and back to my WIP's
Posted by Deb at 6:58 AM 12 comments:

Home of Applique Lovers around the world

I am proud to be a hand quilter

Every Wed Canadian Bloggers link up what they are working on

Please feel free to add yourself as a follower this lets other quilters know you are here and we can visit you. (we would love to see what you are doing)
I know you love quilting as much as I do or you would not have visited thanks for taking time out of your stitching to read about my quilting journey.
I appologize if I don't comment back to everyone that comments but will try my best.

Got a Minute- grab some tea, get inspirec

Thanks for visiting...the world of a quilter.. please come again